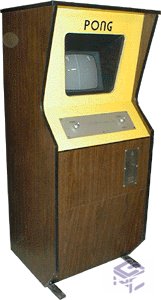 Pong is an arcade game that was released in 1972 by Atari Inc. The game is Atari's first game and helped start the video game industry. Atari's president Nolan Bushnell hired Allan Alcorn to create a game for a training exercise and they liked the game so much they decided to manufacture it. Bushnell based the idea on an electronic ping-pong game included in the Magnavox Odyssey, which later resulted in a lawsuit against Atari. Soon after its release, several companies began producing games that copied Pong's gameplay, and eventually released new types of games. As a result, Atari encouraged its staff to produce more innovative games. Several sequels were released that built upon the original's gameplay by adding new features. Pong has been referenced and parodied in multiple television shows and video games, and has been a part of several video game and cultural exhibitions.

Nolan Bushnell had played the electronic ping pong game on the Magnavox Odyssey in Burlingame, California. He hired Allan Alcorn [ Al Alcorn ] who is good in computer science. Alcorn's assignment was to create a game based on the ping pong game as a warm up exercise. Bushnell looked and played the game and Atari manufactured it.

The game is a 2-d sports game played in a simple way. The player uses the paddle to knock the ball back and forth and must get the ball past the other paddle to get a score. The score is represented by digits on top of the screen. The control is a dial.

Ralph Baer the inventor of the Magnavox Odyssey, the first video game console, got Magnavox to sue Atari, Balley , and Midway. Magnavox and Sander Associates claimed that Pong and the other variations were copied from the ping pong game on the Odyssey. The judge had a look of the circuitry of a cabinet of Pong and saw a demonstration of the safaping pong game on the Odyysey and ruled in Baer's favor.

Bushnell felt the best way to compete against imitators was to create better products, leading Atari to produce sequels in the years followings the original's release: Pong Doubles, Super Pong, Quadrapong, and Pin-Pong. The sequels featured similar graphics, but included new gameplay elements; for example, Pong Doubles allows four players to compete in pairs, while Quadrapong has them compete against each other in a four way field. Bushnell also conceptualized a free-to-play version of Pong to entertain children in a Doctor's office. He initially titled it Snoopy Pong and fashioned the cabinet after Snoopy's doghouse with the character on top, but retitled it to Puppy Pong and altered Snoopy to a generic dog to avoid legal action. Bushnell later used the game in his chain of Chuck E. Cheese's restaurants. In 1976, Atari released Breakout, a single-player variation of Pong where the object of the game is to remove bricks from a wall by hitting them with a ball

By November 1972, the first Pong was completed. It consisted of a black and white television from Walgreens, the special game hardware, and a coin mechanism from a laundromat on the side which featured a milk carton inside to catch coins.

Community content is available under CC-BY-SA unless otherwise noted.
Advertisement